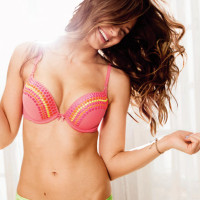 On Facebook today two interesting conversations happened at the same time. One was a post about a clothing company’s catalogue which now features real models without any photoshop cheating, and another was a woman’s realization that she is treated better by strangers after losing a lot of weight.
Both seem to fall back onto a single misguided idea that all people should be treated equally, that they should all be included and made to feel like equals. And to this I must say ‘bullshit’.
From the first article:

They could have truly, in their own words, “broken the mold,” and committed to featuring […] large women, short women, tall women, transwomen, hirsute women, women with acne and vitiligo, women with disabilities, women with different-sized breasts, women who are pregnant or have recently given birth and so on.

This sounds so much like the rallying cry of someone who won the battle and doesn’t know where to direct their anger next. They have convinced the advertisers that all this photoshop fakery created an unhealthy idea of beauty, so they’ve eliminated the un-real people, and the naturally attractive are next.
They’re actually upset that some people are prettier than others, or that the less attractive aren’t used to sell clothing. So they’ve made the next battle one against the people lucky enough to be born pretty, or the ones who are working out and eating right. Which brings us to the second article:

[…]I couldn’t really blame the folks who reached out to me with kindness. It was not their fault that society has so deeply indoctrinated them with the notion that thin equals friend, and fat equals nothing.

Now this is just lazy thinking. Society doesn’t equate fat with nothing, society rewards hard work. Being beautiful doesn’t just happen any more than being an olympic athlete does. Your good luck at birth will give you a head start, but it’s hard work and dedication that determine your success or failure.
I am against the idea of rewarding failure in the same way I’m against hiring the unqualified mechanic to fix my car, or the lazy student with bad grades to engineer my office tower. You work hard, you get rewarded. You give up, you eat yourself into an unhealthy sphere, and you get penalized. Being fat is a choice, like smoking or drugs or tattoos. Some people will penalize you for it, and it’s not because they were indoctrinated, it’s because you gave up, gave in, caved to your wants and desires, and now you’re paying the price.
That’s how it should be.