I’ve been playing a lot of racing games lately. Three games, in particular: Horizon Chase Turbo, Hotshot Racing and Inertial Drift. These games could hardly be more different in their approach, and each has something to recommend.

I’ve been following the development of this since it was called Racing Apex, and I was excited for what looked like a solid return to Virtua Racing-era graphics, when 200,000 flat shaded polygons was astonishing. After a name change and a longer than expected development, it was finally released and it was super great fun. 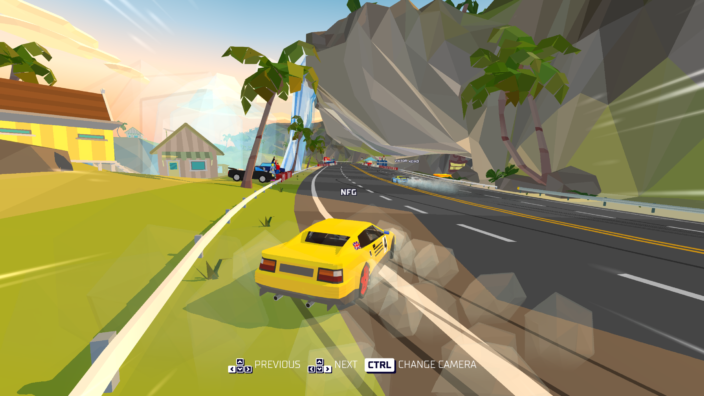 For a little while. It had all the elements I wanted: some challenging racing, if you started playing on medium or hard. On the easiest difficulty each race was merely filler. It was almost difficult to fail, and I did most of the game’s 16 races on the middle difficulty, scoring first in all but two tracks on my first try.

And then I tackled the hardest of three difficulties and could barely win any races at all. The massive jump between the middle and highest levels was a real shock, and it only served to illuminate the problems with the game.

Hotshot Racing relies heavily on rubberbanding for the CPU racers, like the Mario Kart games of old. The farther ahead you were in a race, the faster the CPU racers would catch up, meaning there was no real point in getting ahead, because they were guaranteed to catch up to you, and introduce another glaring annoyance: in order to make the game more challenging, the CPU drivers would intentionally bump your car more aggressively.

Hotshot Racing has little else to offer. It seemed like the developers had an idea for the graphics and not much else. The tracks aren’t really interesting or different, and there aren’t many of them. The gameplay is not much more sophisticated than some Super NES games released three decades ago. 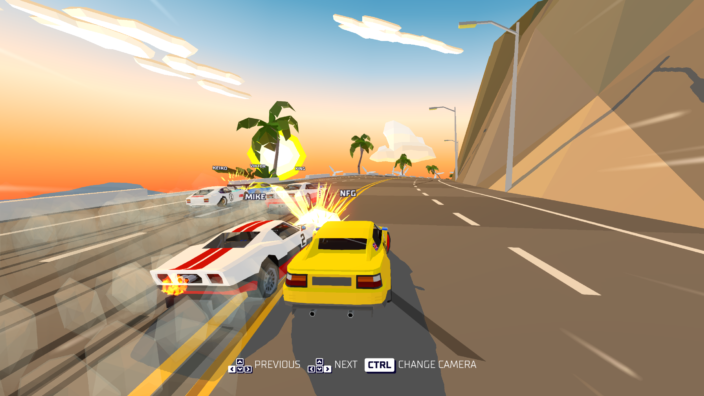 Ultimately this meant that races turned into frustrating attempts to stay just behind the leader and avoid getting knocked around too much until the end of the last lap where you’d spend all your accumulated turbos and reach first place as close to the finish line as possible.

That’s not fun for me, and after only a few days I gave up on Hotshot Racing.

This is a game that caught me by surprise. It’s a fascinating new take on racing with a unique dual-stick control scheme that sounds like madness but feels instantly comfortable. It looks like nothing else out there and has a ton to offer any player. 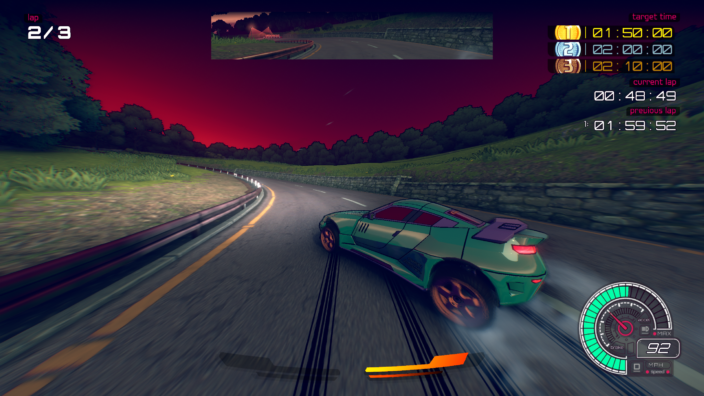 One of the sticks controls the steering, and a the first thing a player realizes is that these cars don’t steer for shit until you nudge the second stick. In charge only of the inertial engine, it controls the drift directly. Within a few corners the meaning of this becomes clear: one stick performs the coarse maneuvering, the other fine-tunes the steering.

It’s absolutely masterful and seems like a blinding flash of genius from the developers. And it’s even more astonishing when you play newer and faster cars, each of which controls almost completely differently. Some might require a tap on the brake to commence a drift, another might require lifting off the throttle. One doesn’t return to driving straight until you let off the gas, while another requires a deft touch to prevent it from spinning out. 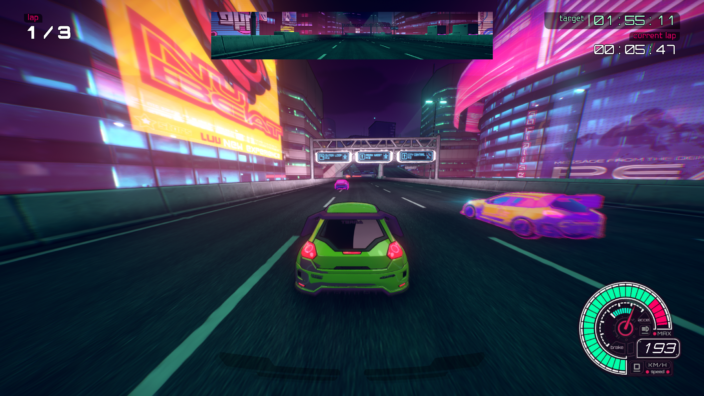 I can’t recommend this game enough. Except for the soundtrack. What feels so much like an homage to Japanese racing games like Initial D (including a track that feels a lot like that game’s famous Mount Haruna course) is let down by a fairly sedate soundtrack. It feels like it should be packed to the gills with Eurobeat, but it’s up to the player to provide these tunes to really set the tone.

But, once again, I slammed into the difficulty cliff with one of the last cars, where I was consistently three seconds too slow (over a four minute race) to beat the required time. So I haven’t played it much since the first two weeks of every minute every day funtime. 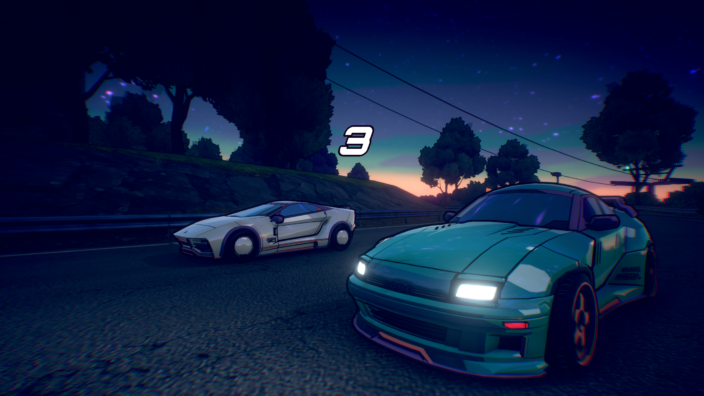 I first played Horizon Chase on my Android phone, and I loved it. Simple, but challenging, with a soundtrack that approaches perfection. I recommend checking out the soundtrack by Barry Leitch. It’s just a perfect accompaniment to the blazing fast racing on offer. 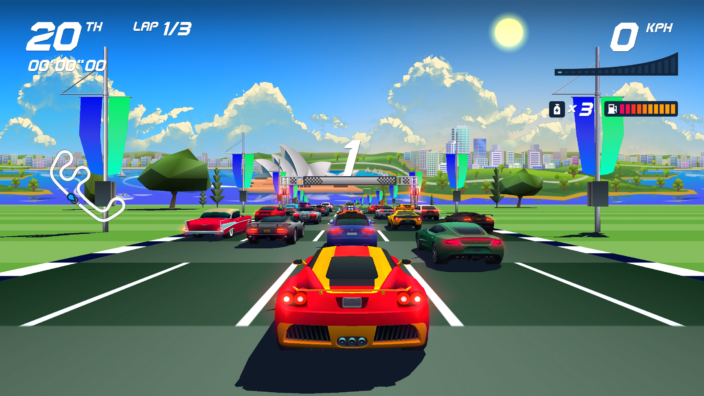 Horizon Chase is not, perhaps, a game for everyone. It is very much a mobile game, with its coin collecting and short races, but that works in its favour as far as I’m concerned. This is a game that knows what it wants to do, and nails every bullet point.

Every race is short, a few laps, and it flashes by in a hurry. I find myself memorizing the locations of the coins as I zip past them. Left side after start, then right, right, and center and then I hope like crazy I get them all before the race is over. Getting all the coins, turbos and fuel in a race is key to unlocking the next stages. 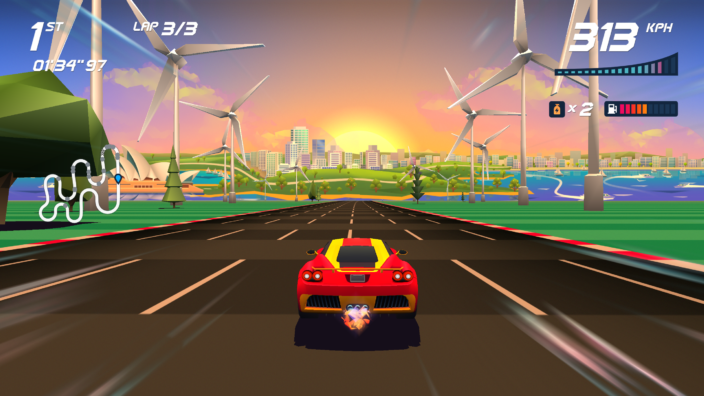 Every track is different, and there are dozens of them, scattered around the globe. Sometimes you get lucky and the coins are easily collected, sometimes they’re on a tricky corner, and sometimes you bump into something at the wrong time every lap and it takes a few tries to get them all before the race is over.

The game trades realism for beauty. It moves like a cross between two of Sega’s old games, Outrun and Turbo. The backgrounds don’t really adhere to the ground, the roads look faster than they are, and the physics don’t even try to be accurate. In exchange, this game is beautiful, taking the low poly retro look and adding a stack of modern accouterments. It looks amazing on a high res screen, and is uncomplicated enough that it animates very fluidly on even low end hardware. 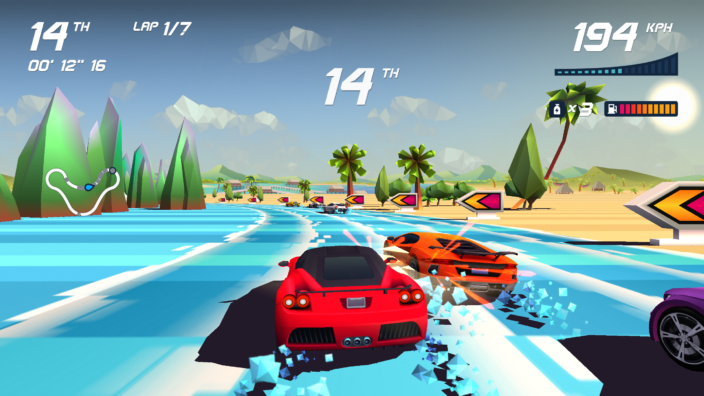 These three games have very little in common. Inertial Drift is an all new game that has perfect controls and heaps of challenge, but is still inviting to new players. Hotshot Racing aimed for a specific visual style but had very little else to offer. Horizon Chase Turbo simply did perfectly everything it wanted to do, and kicked Hotshot Racing’s ass in the visuals at the same time.

I strongly recommend trying art of rally. If it’s soundtrack, gameplay, and good vibes that you’re after, it hits all marks.