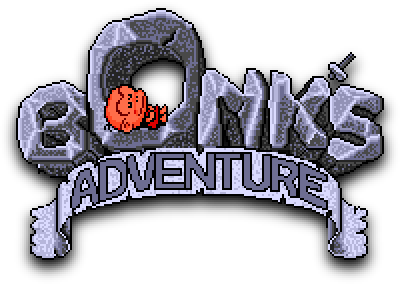 It’s not well known that Hudson, the game developer, created the chips that powered NEC’s TurboGrafx-16 console. After an astonishing series of hits on the MSX and Nintendo’s Famicom, Hudson was sitting pretty. They dominated the 8-bit consoles and, with their own chips inside the TG-16, they were poised to dominate the 16-bit era as well.

NEC provided the manufacturing muscle and the TurboGrafx handily dethroned Nintendo’s Famicom in Japan (where it was known as the PC Engine). The PC Engine was Hudson’s little baby, and was nigh unstoppable. The success it enjoyed in Japan was not forthcoming in North America, however – Sega’s marketing department was, to put it bluntly, kicking everyone’s ass.

So it happened, back in 1989, that NEC needed a hit game, a Mario or Sonic of its own, and it was Hudson that delivered it. Released first in Japan as PC Genjin, which rhymed with PC Engine, and the game fit the diminutive console like a glove.

Renamed Bonk’s Adventure, it was released in North America in 1990 to critical acclaim. A platform game like no other, it featured a caveman protagonist who attacked his enemies by head-butting them, or by leaping into the air and landing on them head first. It was a radical departure from the staid old Mario routine of running and jumping feet-first.

Bonk was immediately a top seller for NEC, one of their first big hits outside Japan, and Bonk quickly became the de-facto mascot for the system. Visually it got off to a rough start. The inventive and comedic graphics were sort of flat, but the wide variety of animations were very smooth and the game played well. Bonk was packed with new moves never seen in other games.

To climb walls Bonk would latch on with his teeth and gnaw his way to the top as fast as the player could mash the button. He was also fond of meat, and whenever he’d find a shank he’d greedily eat it and launch himself into the air, temporarily becoming more powerful. By the time a player reached the first boss he’d already run, jumped, climbed, become invincible, crossed the spiny back of a dinosaur, crawled inside the dinosaur’s mouth and worked his way out the other end.

It was a marvelously refreshing change of pace.

When the first sequel came out in 1991 it didn’t stray far from the formula. There were plenty of new bonus stages, and a few new moves were added, like the ability to climb waterfalls. The big change was in Bonk’s appearance. He had become softer, rounder, a little more cuddly, no doubt in an effort to improve his marketability. The second game was also very popular, and it spawned one more game for the PC Engine.

The third game offered yet more new features, like a two player mode and the ability to become very tiny or grow to enormous proportions. In spite of these additional features the game wasn’t as big a success. The time had come and gone for the TurboGrafx-16, and this final Bonk was too late to sell in significant numbers.

The game and character design were so successful Hudson couldn’t let them die. Several other systems received ports, and in 1993 and 1994 Nintendo’s NES and SNES each saw a version using the same character sprites, though with fewer and more colours, respectively. It’s never easy converting sprites from one system to another, but Hudson’s artists knew their stuff. Even the GameBoy versions, whose sprites are scaled down versions of the first two PC Engine games, managed to capture the spirit of Bonk using only two colours.

There are three distinct phases of Bonk evolution, and one aberration.

The original Bonk was a little rough, with a crooked mouth, large ears and a tiny tuft of hair on the back of the head. The GameBoy sprites are very similar, though obviously smaller. While functional, and not without a certain charm, Hudson wasted no time with a revision.

The second generation Bonk is much rounder, with a smaller ear and no more hair. The PCEngine and Famicom versions are virtually identical, but for the necessary changes in palette. I’m creeped out by the SuperNES version, which started with the PC Engine sprite but uses so many colours that the resulting Bonk looks almost disturbingly realistic, as if they had digitized a real head and pixelled in new features. Interestingly the 2nd-gen GameBoy sprite has lost the details present in the first. 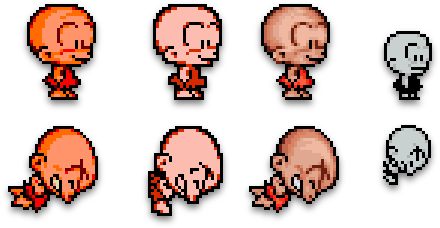 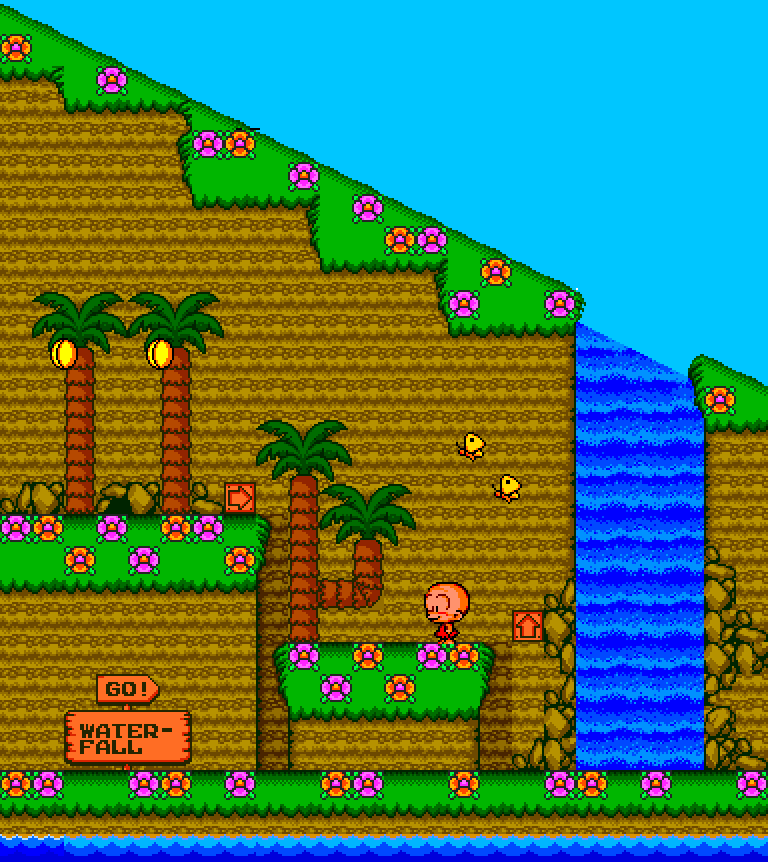 The aberration in the Bonk evolution is the Kaneko produced arcade game. Released in 1994, the same year as the second and final SNES game, it was the only Bonk not created by Hudson. The graphics in this entirely new game, like most arcade games of the time, were vivid and excessive, with more moving objects in one short level than than in any three stages from the console games. It has its own unique style, with a Bonk that could almost be a hybrid of the first two generation sprites, despite being released four years later.

While Kaneko was awesome-ing up the Bonk legacy, Hudson was desperately rapid-firing ideas to death in the second SNES release. It featured attractive but smaller sprites, but Bonk was made into a thoroughly bizarre shape-changing weirdo (see Meat Eater, below). The game was a random, numbing testament to how badly a game can really suck.

This was to be the last console release of a Bonk game for nearly a decade. Bonk had enjoyed a half decade of success, during which time Hudson strayed from the original game’s simple formula in a panic to keep the series fresh. Bonk collapsed under the weight of its gimmicks, and was nearly forgotten until 2003 when Hudson revised the first game, using polygons instead of sprites, for the GameCube and Playstation 2.

The evolution of a game series can go in several directions, getting better or worse or just maintaining an equilibrium without changing much at all. Unfortunately for Bonk, Hudson was set on a serious and swift devolution.

They tried everything, and were not bound by your limits of good taste or playability, thank you very much.

Starting with the second PC Engine game, Hudson started a trend where Bonk, more attractive most of the time, would become quite bizarre looking when he eats meat. In the original game scars would appear and Bonk would become dark and angry, but now the effect was stronger, and Bonk appeared mutated and lumpy. 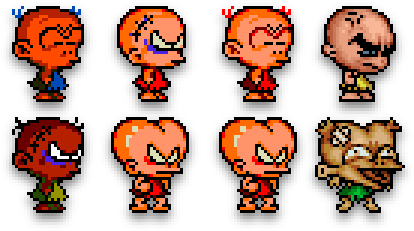 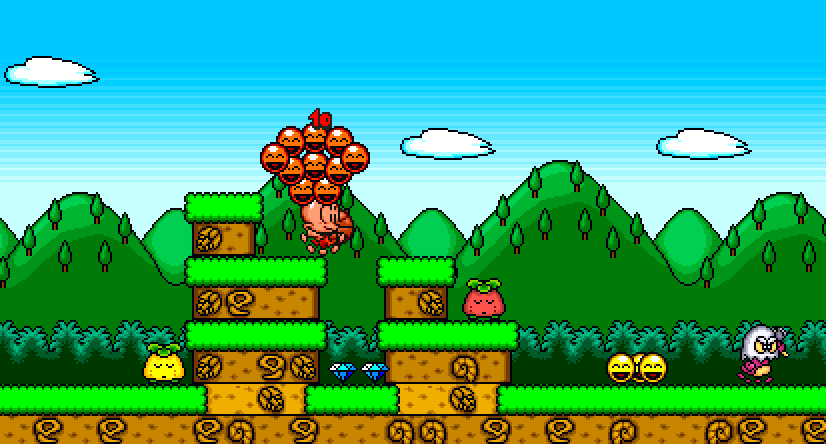 In an attempt to make his meat-addled appearance even more striking, Hudson walked up to the boundaries of good taste, and pushed hard against them. The first SNES game was positively bizarre, and the second one little more than a collection of unattractive mutants. 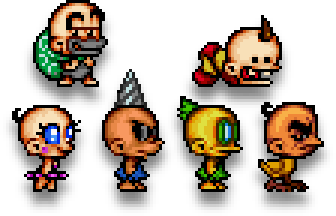 What’s worse than the appearance of Bonk in these later games were the games themselves. Hudson jam packed the crazy into them, levels were maze-like and usually incoherent from the very start.

These two Bonk sprites are taken from the PC Engine (left) and Super NES Bonk 1 . In these two games Bonk could become huge (and tiny), with a bit of less-than optimal gameplay foreshadowing the terrible Super Bonk 2 and its myriad transformations. The PC Engine Bonk is so big I fear Hudson was just showing off. They’re shown next to the normal-sized Bonk for comparison.

When Bonk 2 came out on the PC Engine, Hudson was getting a little bit punchy, and they turned Bonk into a decidedly effeminate creature as the first-stage meat transformation. Big blue eyes, and blowing hearts as an attack.

This was changed for the American release, since we all know how Westerners can’t handle anything that’s not very specifically and reliably one gender or another. The same sprite from the first game was used instead, with a few tweaks to match the newer, cuter Bonk.

And since Hudson basically had no idea what to do anymore, they released a sequel to Bonk in 1 992, called AirZonk. A shooting game this time, and in the future! Because why not?

What is this I don’t even
Super NES