(note: For the entirety of this article I’ll be referring to flat panels as an encompassing term for all fixed-resolution displays: LCD, plasma, DLP projectors etc)

Flat panels are outstandingly clear and, essentially, unbeatable when they’re running in their native resolution. That is, if your flat panel runs at 1024 x 768 and your games are running at 1024 x 768, then your visual experience will be unparalleled. They’re a damned sight more clear than those old fashioned heavy displays made of massive vacuum tubes, spraying electrons willy nilly against a wall of phosphors.

Flat panel displays have, however, a few fundamental problems when it comes to gaming: Their pixels don’t stretch and they can muck with the image too much, robbing it of vibrancy.

If you’re running a game on a flat panel that’s not the panel’s native resolution, it’s going to abuse that image until it fits the screen, and the result is very ugly. A CRT won’t do that. This is one of the critical differences between flat panels and CRTs.

Consider the following image (Dracula XX, SuperNES). It’s displayed on a widescreen CRT TV. The original image is a normal aspect (4:3) image. Also shown are a widescreen and a wide/zoomed version of the same image on the same screen. 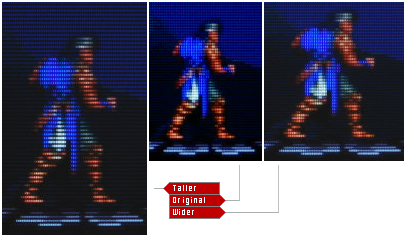 This is the critical advantage of a CRT monitor over a flat panel: they can adjust the distance between pixels vertically, and stretch the pixels horizontally, without any loss of detail. CRTs accomplish this by changing the speed of their old-fashioned electron beams. If a flat panel needs ten fewer pixels in an image, it resamples and rebuilds the image to stretch it to the fixed number of pixels it can display. A CRT just spaces out the pixels a little bit so they fill the screen without degrading the image.

Put another way, the CRT can adjust the size of the image without degrading it. Because it’s an analogue system a CRT can simply redirect the signal on the fly, without changing the signal itself. A flat panel, most of the time already sampling the entire image before displaying it, has to re-scale the entire image before display. This is like capturing live TV into a PC or onto a VCR – it never looks as good as the original. Modern flat panels employ all kinds of processing to make images look better, and here’s where they falter again: They’re not designed to polish computer graphics, the designers assume most people will be watching movies or TV, and the image manipulators are tailored to this belief.

Of course PCs don’t have this problem, with their new-fangled digital connections amd tuner-free monitors, but they do have the same problem when it comes to displaying an image that’s not the display’s native resolution. You can run a game at 800×600 on a flat panel, but it looks like ass compared to the brilliant clarity of images running at the native resolution.

It’s all about scaling. Have a look at our friend Mario. These images are enlarged for clarity, but show what happens to an image that is scaled up from a smaller source.

The original has been hard scaled evenly, so that every pixel receives a whole-number increase in vertical and horizontal size. The middle version was soft scaled, averaging each pixel with its neighbors to achieve a result that approximates the original. This kind of soft scaling works very well on photos and movies, but not on games. The version on the right was hard scaled by 50%, so that every second pixel was increased in size. As you can see this hard scaling technique works well only if the new image is enlarged by whole numbers. Any attempt to hard scale without exactly doubling (or tripling, quadrupling etc) the original image results in this ugly, misshapen Mario.

These next images were created with an emulator, and illustrate the problem LCDs face when trying to display non-native resolutions. They simply cannot cope by spacing out or stretching the pixels, they have to re-sample the image. This not only makes the image blurry, it makes it less vivid, robbing it of contrast and saturation.

In the above image our hero Wonder Boy looks as good as his creator intended on the left. The version on the right was soft scaled in order to appear larger on an LCD monitor. It’s immediately obvious that the new version is blurry and isn’t as vivid as the original. This soft scaling, where every pixel is averaged with its neighbors, works a treat on photographs and movies, but it’s clearly not sufficient for games. In the soft-scaled version on the right, which shows the identical section of the game screen, you can see the edge of an unseen door blending into the cropped image.

All LCDs, DLPs and Plasma screens apply this soft-scaling approach to image resizing. I’m not aware of any that allow you to opt for hard-scaling (or better, whole integer hard scaling). Some will allow a player to view the origina, un-enlarged image, but even this is unsatisfactory, as you can see:

The above image shows a 1280 x 1024 monitor playing a 256×224 Sega Genesis game. Without integral hard-scaling the image will be ugly and a poor substitute for the original, but modern flat panel displays do not consider this important. Indeed, on modern polygonal games which are typically anti-aliased and a bit blurry already, soft scaling doesn’t matter quite as much.

For retro player, the message is very clear: If you care about image quality, you won’t play your old games on a flat panel display.

Flat panel monitors have a lot going for them. They’re light, they’re flat, they’re thin, they hang on walls, they mount on thin pedestals. They’re also geometrically perfect – there’s no such thing as misconvergence on a flat panel, pincushion and skew adjustments are things your granddad rambles on about. They are pixel perfect for gaming – except that they’re totally not.