Flip and Flop was a very cool game. It earned kudos upon its release in 1983 for being entirely non-violent, but despite that shortcoming it was good fun.

You played either Flip the kangaroo or Mitch (not Flop) the monkey, and you were escaping from the evil zookeeper and his sentient net… by, uh… colouring in squares. 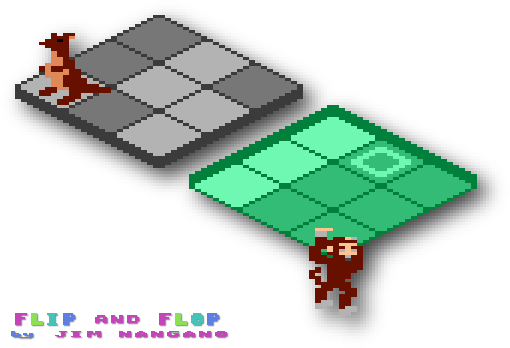 Have a look at that screenshot above. That’s Flip and Flop completely destroying your brain. After every stage as Flip, you play the same stage as Mitch, but the graphics are sort of inverted. The layout is the same, but your entire perspective shifts, and causes you to die.

The trick is simple. The platforms are the same, in the same position, but the edge which gives it depth is moved from the bottom to the top. And your brain panics. 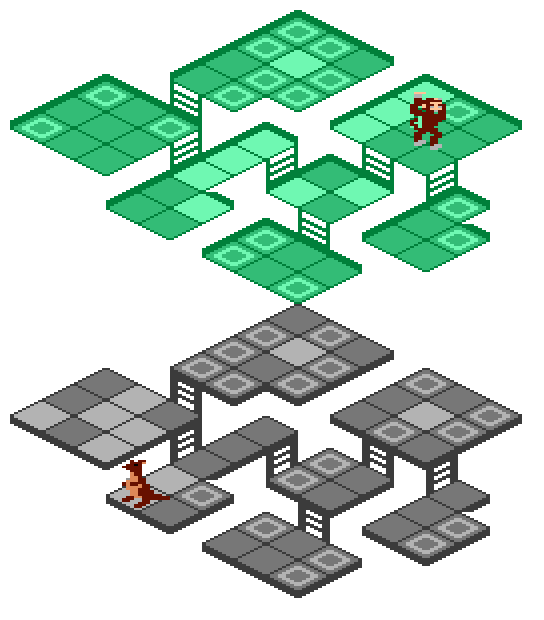 The biggest brain bender is the orientation of your character. You spend one level knowing that your kangaroo’s feet touch the square you’re on. Bottom of player = safe zone, OK? The next level you’ve got to watch your monkey’s hands: Top of player = safe zone. It’s simple conceptually, but mind-bending in reality. You’ll always be tapping the pad just a panicked half-touch in the wrong direction, and know damn well you screwed up long before your monkey or ‘roo completes the jump to the next square. 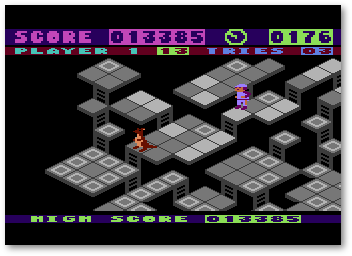 The game starts off with very small stages, but every Flip stage is larger than the last (the Flop stages are the same but inverted, remember). Soon they’re very large indeed, and you can often hear your pursuer’s footsteps but not see where they are, and the edge of the map is creeping closer and closer and suddenly you’re in full-on panic mode as they appear right next you OMG. You can pass through them mid-hop, but if you touch the same square as them, you are caught.

The game offers you only one defense: sticky flashing squares. You can lure your pursuer onto them, trapping them momentarily, giving you time to get away.

It’s the very best kind of gaming. It’s fast, it’s fun, it’s cute, and it makes your brain hate your eyes, and its own primitive perspective faculties. It’ll also tax your reflexes and controller to the max: if you’re playing with a sloppy pad or joystick you’ll be enraged quickly. It’s very easy to walk right off the edge of every platform when your hands, eyes and brain are at war with each other.