I’ve been abused in the past for hating on Australia. I’d like to take this moment to write some positive words about this country. Specifically, I’d like to talk about Australia’s super-happy protective gun laws.

Let’s start with the backstory. A friend sent me an airsoft gun from Korea. Customs in Australia seized it and sent me an 8-page letter detailing the reasons for seizure and the methods for claiming the gun if I wanted to. Bottom line, I need an import license, the same license I’d need to import a high-powered hunting rifle, to import this $5 toy plastic gun. 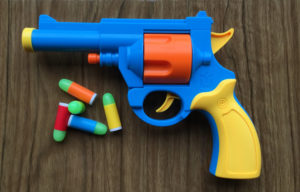 (This isn’t the gun being discussed)

(a commenter from the original thread said it couldn’t possibly pierce the skin of a pudding, but it’s still too dangerous for Australia. He added, and I quote, ‘flaming plonkers‘.)

I called Customs about the airsoft pistol they didn’t want me to have. They said I couldn’t import it without a permit, but in order to get a permit I needed to get a license, and for that I needed to know what category of wickedly dangerous firearm this plastic gun really was.

The customs guy assured me that in order to get a license I had to have the gun pass safety testing, which it wouldn’t because it’s plastic. That’s exactly what he told me. Nice work, despite being plastic it’s dangerous enough to be outlawed, but because it’s plastic they couldn’t approve it for use. That was, he was quite firm in telling me, the end of it.

In Australia you also need a license to have ammunition. This must naturally extend to nearly weightless plastic BB pellets. Despite confiscating a bag of 2,000 pellets Customs left about 20 pellets in the box I received. “Oh,” I thought. “Oh shit, I’m in possession of illegal ammunition!” So I called Customs again, and the conversation went something like this:

And I think she started to doubt my mental faculties at this point:

She says “OK look, can you send them back to us?”

That’s right folks. In Australia you can’t have plastic guns and you need to send plastic balls to customs for safe, licensed disposal.

Then my dad points out I probably can’t send illegal ammunition through the mail.

The image shown for this post was yanked from a Google search. The source was this Youtube video which inexplicably has 32 million views.

I’m strongly agains firearms, but this is ridicolous!