This is a repost of an old article, in a more modern, readable format. Sorry about the images being so small…

Japanese is a very onomatopoeic language. A huge number of ‘words’ in Japanese are just sound effects, and daily conversation is littered with sound effects used as regular words. It’s a lot of fun, really, but the reason I bring this up is to explain the title of this game: Kororinpa is essentially the cute sound of a marble rolling.

Hudson released this little number with very little fanfare. Compared to other games, which were available very large quantities (up to a hundred each) at my old local Toys R Us in Japan, there were only four Kororinpas for sale. I snagged the last one, and I’ve been playing it more than WiiSports and Hajimete no Wii (WiiPlay) combined. It’s really great! 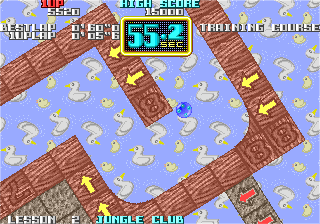 Cameltry (shown above) is this game’s spiritual successor. If Taito had said “Hey, Hudson, let’s see a 3D Cameltry!” this game would have been the result. It also superfically resembles Sega’s MonkeyBall, but Kororinpa’s easily the much better game. Of course, Kororinpa is also the virtual incarnation of that centuries-old wooden ball-rolling maze game most of us have played as kids. We might have thought the game would get easier if only we could manipulate the maze directly instead of using those knobs on the side, but Hudson has proven us wrong. Kororinpa’s damned hard. 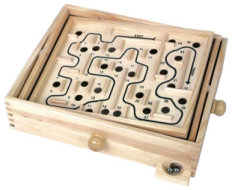 At its heart Kororinpa is a devilishly tricky game with a perfect control scheme. I was very worried that Nintendo’s tilt-sensors would be twitchy, jerky, or generally unreliable, but this hasn’t proven to be the case. In Kororinpa you tilt the Wiimote to tilt the world, and the ball, affected by a constant downward gravity, rolls accordingly. Tilt the Wiimote away from you, and the ball will roll into the screen. Tilt it to the left, and the ball rolls left. Rotate it 90 degrees in any direction, and the ball is a hair’s breadth from falling to its doom, riding on the thin walls that kept you from falling off a moment earlier. This kind of insane careless tilting comes in handy later…

This kind of tilting is also the cause of some serious screaming around the NFG household. There are segments where you must flick the controller 90 degrees on its side, dropping the ball onto a new base that was previously a wall, without falling between the gap between them. There are maddeningly tricky spots where you have to navigate diagonal platforms that bend as if along the wall of a tube. Throughout it all the controller never lets you down, and you know damned well all your failures are yours alone. Savour them, cherish them, then beat the crap out of them to clear another stage.

Hudson has done a very good job with this first-gen release. There’s not much to learn: tilt the world to make the ball roll. Simple, right? You might expect that such limited controls would limit the long-term appeal of the game, but the simplicity of the concept is the game’s core appeal. Unlike several other release day games, Kororinpa has clear goals and a definite end. Play and fail a few times, and then beat a level. Progress is made, and you work hard to beat the next level. It’s engrossing, and as the levels progress, not a little bit mind-bending. 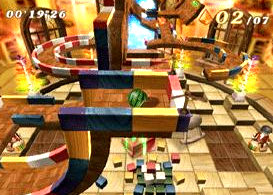 Remaking a simple concept in this modern era is often a tricky thing. The boss wants the game to be 3D, the publisher wants there to be unlockable crap, the platform owner makes stringent demands about all kinds of things, and the poor designer just wants to make the best ball-rolling sim the world’s ever seen. And all this in time for the system’s launch. To their credit, Hudson’s done everything required for a modern game without crossing that line between fun and frivolous.

The unlockables are easily achieved – typically completing a stage is all you need to do. There are special green crystals that are hard to collect, but they’re not really required to unlock different soundtracks, special secrets and different balls. In fact, their purpose remains unknown to me. The game only says that ‘good things happen‘ if you collect them. 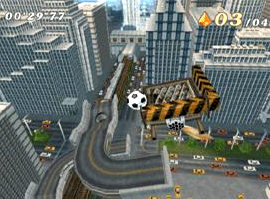 And here’s where Kororinpa really starts to shine: completing levels faster results in bronze, silver or gold awards. Collecting golds unlocks further levels, and these new Galaxy levels are brutally hard. But this is where Hudson’s appreciation for oldschool gametypes really pays off, as the player, thoroughly versed by the end in the game’s controls and physics, goes back and starts racing the clock. Levels that were completed the first time in four minutes are now cleared in under thirty seconds. Some stages will see you knocking an amazing six minutes off your first completed time, only to find that you’ve only achieved a silver. Silver!? You bastard, I’ll get that gold this time! Addictive? Bloody hell, is it addictive.

The different balls are very clever. Half of them are just cute variations of the original glass marble: cats, dogs, penguins, each with their own cute face and endearing sound effects. The other half are functionally different, and the game makes an effort to describe them before you select them. Some bounce higher when dropped, some have more mass and momentum, and some are cryptically described as ‘for experts only’. In one level some nasty vertical drops were seeing my little glass marble bouncing over the precipice. I started with a heavier ball and completed the level easily. My favourite all-purpose ball is the ‘Gas Tank’, which looks like the giant green gas tanks dotting the landscape in Japan. 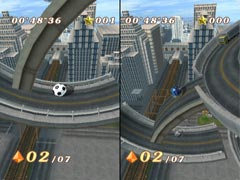 The two player mode is a fun diversion. It’s the same game, in a user-selectable horizontal or vertical splitscreen. Two players are asked to race to the finish, and if you thought the 1P mode was frantic you ain’t seen nothin’ yet!

The splitscreen adds a new, difficult twist to the equation, as you can’t always see what’s coming towards you soon enough to react to it. This only serves to increase the pressure, as you’re trying desperately to beat the other player with reduced visibility. It’s like racing in fog.

Strangely the game doesn’t use two Wiimotes, but instead sees player 2 using the Nunchuck controller. This is yet more entertainment for the players as, in fits of WiimoteWaving it’s easy to yank on the other guy’s cord, and mess up their balance. =D

It’s hard to say how the game will fare in the long term. By level 25 I was encountering serious difficulty, but for all the adversity I faced I never wanted to give up and stop playing. I don’t know how many levels there are yet, but I’m having a blast with the ones I’ve seen so far.

The graphics are very smooth and competent, without being especially noteworthy. The music is really not my style, being suited more to a fancy restaurant than a marble rolling game. These things really don’t phase me – you can turn off the music (a feature too few modern games offer, dammit) – as I’m here for the gameplay.

Kororinpa’s got gameplay in spades. It’s fast, it’s fun, it’s often frantic, and occasionally frustrating. It’s also fun for everyone: the game appeals to everyone with its obvious mechanics and harmless graphics. Zumi’s been playing it at least as much as I have, and we’ve both enjoyed every minute.

There are a few weird things about this game. Despite it being widescreen-aware the image is compressed vertically, with black borders on the top and bottom. It’s easy to fix using the zoom feature of your TV.

Two player mode is played without a second Wiimote, but with the Nunchuk controller. I find this a bit strange, but since the Nunchuk has its own tilt sensors (who knew!?) the game is no less playable for it.

It’s all in Japanese, but the only time this will be a problem is when you try to read the attributes of the different balls.

I love it. It’s bloody hard and bloody fun, for everyone you know. There is nothing wrong with any part of the game. If I had to come up with any minor faults, it’s that by level 25 it’s too hard. Still though, that’s twenty five levels of steadily increasing challenge. The difficulty curve is very well planned.

What is up with this camera? I guess half the challenge is not being able to see what’s going on? I don’t remember being this frustrated with it at launch…