The Neo Geo CD pad is typical SNK: it’s strong, impact-resistant, supremely comfortable and utterly unique in its manufacture. It’s also fundamentally flawed and so prone to failure that you’re virtually guaranteed to get a flaky one if you buy it used.

It’s pretty easy to see why SNK felt the need to release these tiny controllers. Their cost-cutting CD system had to have a controller that was smaller and cheaper than their large, heavy and expensive joysticks. I can imagine that the bosses at SNK demanded that their pads be awesome, like SNK is awesome, and be totally unlike any other console pad. The pad’s outer shell is asymmetrical, indestructible and utterly comfortable. It has the right heft, the right texture, and a perfectly reassuring solidity that makes you want to hold it and fiddle with it whenever you see it. The four action buttons are standard fare, hard plastic discs over rubber mushrooms that close a circuit, just like pretty much every other pad ever made. The start and select buttons are soft rubber, just like many other pads.

It’s the ‘d pad’ that makes this controller unique. It’s more akin to a stick than a pad, and in fact sits atop a long stalk, just like a joystick. When pressed, it pushes against a spring which compresses a little before clicking the switch. This results in a pad with a lot of throw and a satisfying clicking action unlike any other.

If I might digress a moment, I’d like to lament SNK’s schizophrenic nature. They have never really been capable of making any hardware that wasn’t flawed somehow. Their Neo Geo home console was poorly built; their joystick cables made of fragile, oft-broken plastic; the joystick knobs cracked more often than not; the CD system prone to failure; CD power supplies that were guaranteed to break internally; etc; etc; etc. All these things marred some rather incredible and long-lasting technical wizardry and really make me think that the Neo Geo system’s success was a result of luck, not skill. Probably they set out to invent a four-slot toaster and got a four-slot arcade machine instead. End of digression.

First, it’s incredibly inaccurate. The round d-pad has a round gate with no tactile indication of its compass-point orientation. This means left feels the same as down-left feels the same as I meant left not down left you bastard. You get used to it and you compensate and with extensive, rigid training you might get good at it, but in the heat of battle when you’re trying to pull off a

you’re probably not going to succeed.

So for fighting games it’s not a very good pad, and this is a shocking failure for a company known for exactly those games. It works fine for shooters and any game where you’re performing constant movement, but tap-tap and other accurate movements typically fail ’cause there’s just no feedback. The player cannot tell if they’re hitting the compass points or not.

The internal mechanism is clever but it’ll die after a few tens of hours use. And the reason is a silly one. Unlike Nintendo and Sega and NEC and basically every other pad manufacturer, SNK didn’t use a durable fulcrum. Instead of a hard plastic hemisphere against a hard PCB, SNK has the end of the d-pad’s shaft resting in a soft plastic bowl, and like every N64 user will tell you, plastic rubbing on plastic creates a lot of dust. In the SNK pad, this dust gets into every part of the d-pad, including the partially-sealed switches, and it basically stops working. 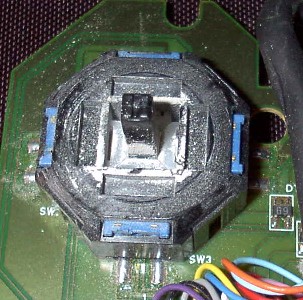 Luckily you can repair them but typically they don’t feel quite as snappy afterwards. It’s just one more lamentable failure in a series of almost-awesome products from SNK.

So the bottom line, I think, is this: a brilliant pad to hold and fondle, but is entirely inappropriate for the kinds of games it was designed for.

The same d-pad was used for SNK’s NeoGeo Pocket system, and to their credit they seem to have fixed the dust problem as these units no longer grind themselves to oblivion in a week. One would hope then that the more recent releases for PS2 and PS3 have been similarly fixed.