I’ve never really been comfortable with modern game thinking. A lot of people I know subscribe to this idea that videogames can be more than they are, that they should be more. More emotion, more story. They see this as the way forward, a way to… I don’t know, legitimize the medium they’re invested in.

But I don’t agree. I don’t think they’re wrong, I just think that what they’re doing takes gaming away from its pure centre and makes it less of a game.

All the instruction I need: Destroy the Sinistar. Got it.
And I think I’ve worked out why I think this way. Back when the Nintendo Entertainment System was new, I explained to a friend the difference between American and Japanese games thusly:


Japanese games have an ending. Mario and Zelda and Castlevania have stages and levels and a point beyond which there is no more game. American games, and remember the era, this was very much back when arcades were still amazing, had no end. Asteroids and Defender and Robotron had an increasing difficulty level, but the gameplay never really changed and they’d challenge the player forever.

And from this I developed the idea that the play itself was everything. If your game isn’t fun, if that joystick and two buttons and whatever’s on the screen isn’t enough to captivate and motivate the player, your game is a failure, and adding a story is sometimes attempt to cover it up. 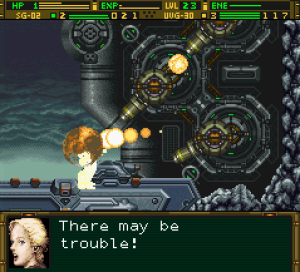 That’s quite enough chatter, thanks.I don’t think stories in games add to the experience. The gaming press used to go on about the backstory in Mortal Kombat and how kids wanted to play the next game to see what happened to the characters, and I was always thinking really!? Who the fuck are these people, why are they even playing games? They might as well be hanging out to see what colour the joystick will be.

So when modern games make a big deal about how personal, how important, how emotionally wrenching the story is, I do not care. I do not give one tenth of a rat’s ass. I don’t understand you, Mr. or Ms. Developer. I don’t understand your motivation, whatever reason you have for making and playing games is fundamentally alien to me and I’m reasonably sure your game will not be compelling as a result.

Honestly, I never cared why Mario wanted to clear the Donut Plains. I think it’s bizarre that anyone might have. Good point! It may not be directly related, but you made me remember the day I tried Castlevania: Lords of Shadow demo on Xbox 360. I tried to like the game, really. But after some minutes of playing, I got quickly bored. Then it dawned me that the older Castlevania titles from NES put me into the fun and action instantly from the moment I started the game.

Having extensive intro or especially mid-game cutscenes for storytelling in modern “retrostylized” games drives me crazy sometimes, when they break the gameplay flow, e.g. Ducktales Remastered.

Game flow, while not directly related to ‘story’ is critical to me. The newest Geometry Wars (3: Dimensions) was a pretty serious offender (see my review) in this regard. If you’re in a slump you might have several rounds that last only five seconds, having a ten second intro is unforgivable. It’s disgusting that it was allowed to ship like that.

So yeah. Going back to 8- or 16-bit games that take 5 seconds to load up, go through the title screen and start playing, is immensely satisfying.

Absolutely agree! The only thing I’d say is it’s not exactly entirely new to the medium (see, I’m getting pretentious there, calling it a “medium”) to care about the story and characters. There was talk like that in the 80s in the computer gaming circles. Text adventures and other adventure games were considered more sophisticated. There was worry that graphic adventures would take away from some of that text-only sophistication of early adventure games. There were RPGs early on too, of course. So there was always an interest in story, and some game manuals (again, especially on the computer side) had quite a lengthy amount of text in them, explaining things. But I grew up more with NES, Atari and Sega, and going to the arcades, and I preferred pure gameplay action the most.

Even with a game like Contra on the NES, when I heard that the Famicom version had story in between levels, my immediate reaction was “Really? That sucks. Glad they cut that out.” But virtually every article says it’s the superior version. I can only assume that any future re-releases of the game will translate the text of the Japanese now and offer the “complete” edition for our enjoyment.

I like to use my imagination too and feel the music and graphics do a good enough job on their own creating the setting… it’s possible that a bit of “motivation” or “scenario-izing” is needed, such as the instruction manual opening pages, or back of the box blurb, or the text that often accompanies an attract mode if you don’t press start at the title screen… little bits like that, It sets things up. Even Robotron kind of had that. But mostly I just want there to be a game, not reading. It basically comes down to whether you feel your controls are interrupted.

If we ever develop ways of interacting with characters and stories in such a subtle manner that your controls never feel interrupted, but just as much in control of things as you are of little character sprites all the time in 8-bit action titles, then maybe I’ll change my mind. But usually the kind of control they’re talking about is selecting from a few options that affect the next movie-like story sequence and you don’t really need a gamepad or joystick for that, a DVD remote would do just as well (or a CD-i remote…)

Of course, at the risk of making this comment longer than the article itself it’s responding to, I should note that Ninja Gaiden and Strider did story segments pretty well, but they’re very short and fast-paced and you skip them instantly if you want. I just think that games like Metroid would never really had their charm or mystique if they had been broken up with text a lot of the time.

Thanks for the thoughtful reply.

I wrote a long reply but my original train of thought on the subject is rather thoroughly derailed and it became nonsensical. I may come back to it. =)

Hey, um, you may have noticed like 4 replies here :)) What you see are my edits as I wondered why my comments didn’t appear (another comment I left, much shorter on another page, appeared immediately, so I didn’t think it was moderation). So I tried shortening them up and rewriting it (copy and paste). Sorry about that.

Didn’t really notice the problem with Geometry Wars 3, actually, but maybe it just gave my fingers a few seconds of rest… the really good old arcade shooters like Robotron are very immediate, you’re right, and I love that you can get instantly to title screens with NES and PC Engine games (even CD titles, I think). I wonder if we’ll ever return to that. Mobile titles seem a little slow too, with lots of logos to present. But I know with Geo Wars 3 you’re talking about the polys forming on each stage as you restart… I’d recommend TxK (PS Vita) instead, if you haven’t played that. Ultratron was also surprisingly good, I thought, though much sloppier… and well, if I was a professional reviewer or took games more seriously I might find Ultratron kind of bad in some ways… so I can see you saying it does a lot of things wrong. But I found it pretty satisfying with a good pair of headphones (it’s better than his Titan Attacks).

Haha I did see your replies, but I managed to work out what had gone wrong, no worries. =)

I don’t own a Vita, but if I did I would only buy TxK.

Got something to say?