So, further to a recent post about my Sega Naomi cabinet, I’ve been tinkering a bit more under the hood. Honestly, and I’m not proud of this, I spend way more time fucking with the wiring than I do playing games. It’s been this way since about the year 2000 when I discovered RGB monitors. Anyway, I digress.

The cabinet I picked up has been modified by the original importer (Highway Games) to support both JAMMA and JVS game boards. JAMMA is a simple system, with one connector that handles all input and output to the cabinet: player controls, coin inputs, video out, etc. JVS is an attempt to future-proof the JAMMA standard with an over-complicated 4-wire serial communications protocol between the game board, an I/O board, and the rest of the cabinet.

Basically, instead of connecting everything in the cabinet to the game board via one connector, you now had at least four: power, video, audio and I/O. And the I/O board has more than 80 wires coming off it. It’s… I can see what they were trying to do but fuck me. It’s a mess. 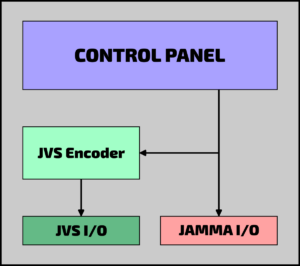 Anyway this cab has both JVS and JAMMA. The JAMMA was wired up by a gibbon or macaque, with 5 volts where no volts should be, wires left disconnected for no reason, etc. So I fixed all of that, before deciding that I’d like to be able to add consoles to the mix. One thing I wanted to do was keep the wiring simple and so I thought I’d just buy a JVS decoder, hook up a couple of NeoGeo connectors for P1 and P2 controls, then slam any console I wanted in there with minimal fuss.

But it turns out no one else in the whole world wants to decode a JVS signal. I’ve never found any pre-made products that’d do the job. The closest thing I’ve found is the Irken Labs Jammafier but it’s like $300 AUD, and fuck that. I found something that does the same job, a product known only as JVS Console V.2.03 which was a third the price. It basically provides discrete control panel signals via the JAMMA connector. So I ordered one, and it didn’t fucking work. Most of the directions worked fine, but P2 RIGHT would always pulse on/off when activated, and P1 button 2 would sometimes pulse, and other directions and buttons would randomly do it. It was wholly useless, and so I had to return it (and that’s an ordeal for another post).

And then, finally coming to the fucking point of this post, I realized I could just get the control panel signals from the existing JAMMA connector. It doesn’t help me simplify the wiring at all, so my dream of hauling the JAMMA wiring out of the cab are on hold for now. 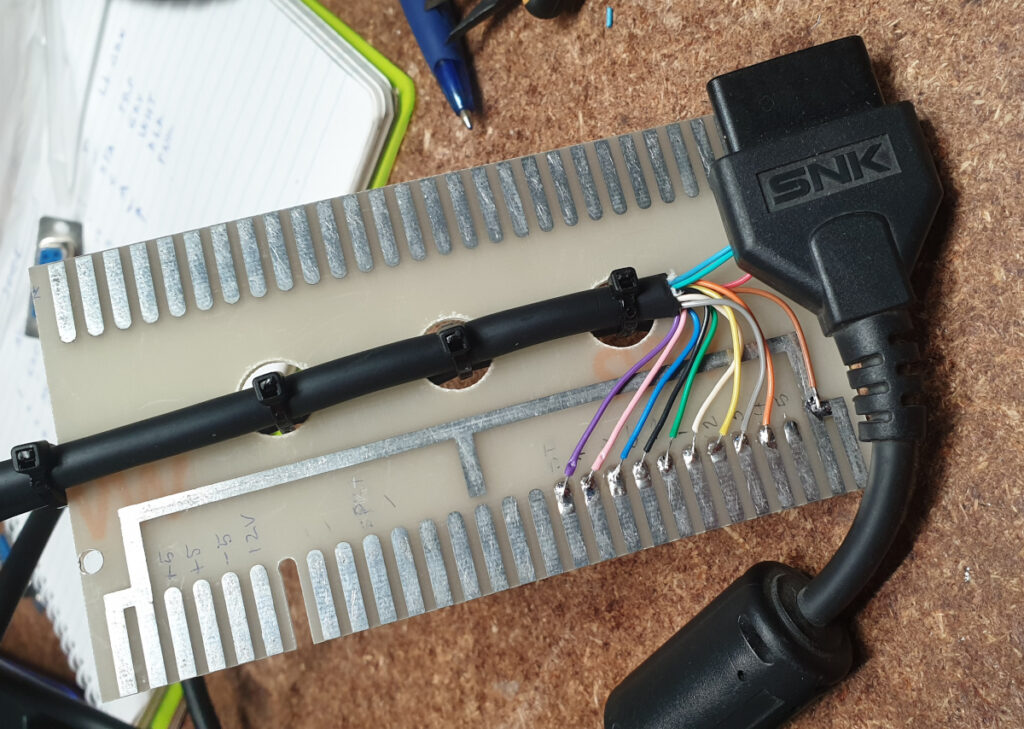 But anyway, I solved the immediate problem with this little device. It’s a JAMMA edge connector with two NeoGeo controller cables soldered to it. It’s the most complicated solution to a simple problem I’ve ever made, but it’s far less complicated than the JVS I/O solution I’m bypassing.

These cables can be plugged into a Neo Geo console or any of the countless controller adaptors I’ve made in the last few decades. I slammed this thing home and was playing Saturn, NeoGeo, GameCube and Playstation games within minutes.

I had installed Seimitsu PS-14-K buttons in the panel, which came with their stiffest springs. It’s a great button and the stiff springs feel great, much better than the lifeless spring-free versions. But I suspect I should have gone with the half-strength (quarter-Newton) springs, because the stiff half-Newton springs tire my hands, and make rapid-fire button bashing virtually impossible. And while playing Star Soldier on the GameCube I couldn’t achieve the rapid-fire shot without a lot of strain. 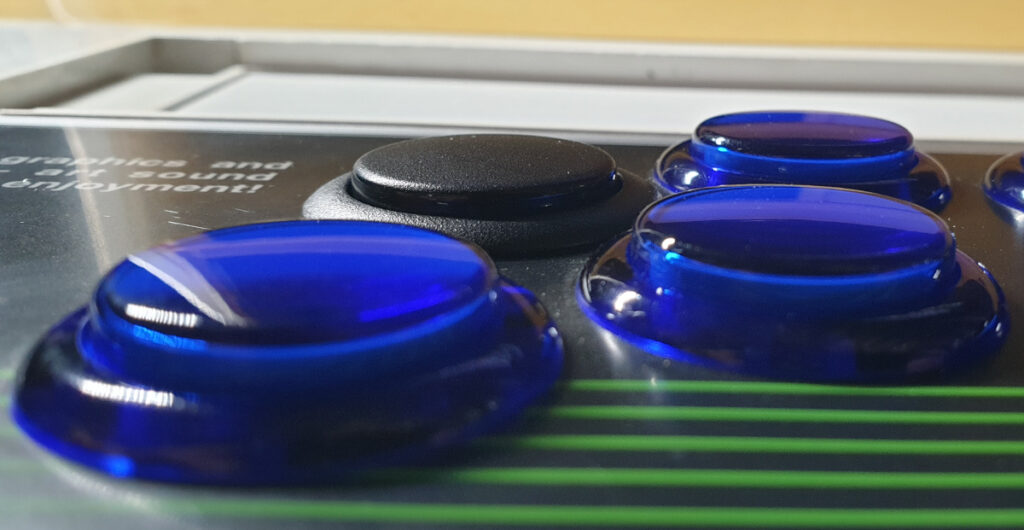 So I slapped one of the Hori Hayabusa buttons in there. It has no spring and so is just as lifeless, but this is mitigated by its lower height and smaller travel distance. It doesn’t feel as slow because it doesn’t have to move as far when it’s released. And the texture feels really nice under the fingers.

The Hayabusa buttons are supposed to be the same size as the Sanwa or Seimitsu equivalents, but they tend to move around in the panel much more readily. This isn’t obvious during play, but still it bugs me.

I don’t want to replace the beautiful blue buttons with boring black ones, but there’s no denying the springless Hayabusa buttons are much better than the heavily sprung Seimitsu units for shooters.