The Atari 7800 had, when designed, an unusually powerful graphics chip. Or something, it doesn’t matter anymore. Atari, in a state of ownership flux as Warner sought to dump it and the ex-Commodore Tramiels tried to wring every penny from it, sat on the 7800 console for years before finally releasing it, outdated and outgunned against the NES.

Along with this new-and-antiquated system they released the ProLine joystick. A definite improvement over the Atari 5200 floppy analogue abomination, the ProLine was comfortable and accurate. Comfortable, that is, if you liked hand cramps. The base of the stick is long and narrow, far too narrow for most adult hands, and after a few minutes of playing your hand will cramp up crab-claw style. 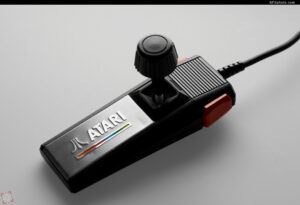 Despite this, it’s very accurate, with a subtle tactile response and a very short throw. It feels comfortable for both left- and right-handed players, though both will need time to become acclimated to the crab-claw grip. It’s a great joystick for retro gaming Pac Man and other maze games like Dig Dug and Mr. Do, as it’s one of the very few sticks with which you can play at full speed and never feel like the stick is causing more failure than your own lack of skill. It sucks at tap-tap motions however, as required in games like Flip and Flop or Frogger: it’s too stiff, and the base is too small to create leverage.

The fire buttons are also garbage: they wobble in their socket, have very little movement when pressed, and have almost no tactile response. You mash and you mash and your thumb gets sore and your hand starts to cramp and you start thinking “Fuck, why do I like this stick again?” And then you play Pac Man, and it all becomes clear.

They should have called it the Atari Maze Game Stick. 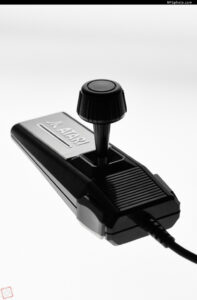 The second fire button uses the same connector pin as the first, but uses an inline resistor so the console can tell which is pressed. This is ignored on other Atari systems, and it responds like a one-button controller on the 2600, 800-series and the ST. It completely freaks out the MegaST and TT030 however, which suffer all kinds of weird, intermittent keyboard failures.

The mechanism is surprisingly solid, and it suffers an incredible amount of abuse. It uses a metal shaft, and a metal half-sphere fulcrum in a plastic cup. Interestingly, it uses the same switch mechanisms as the Atari 2600 stick: little metal mushroom caps taped to a PCB. Also strangely, the mushrooms are upside down, on the bottom of the PCB when the stick is held normally.

It’s durable, you can bash the shit out of it and never worry. It’s light and, most of the time, comfortable. It’s not expensive, not rare, and with no encoder, very moddable.

View the The Connector Pinout.