I’m a very fussy reader. I require my stories to be smart, and the characters in them to be relatable. When a story’s premise is daft, I can ignore it for the sake of a rollicking good yarn, but if the people are stupid I can’t continue for long. It’s the same for movies, which explains why I love Pacific Rim but hate Prometheus.

Daniel Suarez has written three very interesting near-future books about technology, and possible logical conclusions of the march of progress. Daemon and Freedom dealt with a clever series of scripts that wreaked havoc around the world, and Kill Decision was about a very plausible drone future. Both were chock full of ideas that didn’t seem too far fetched, and while sometimes clunky, I was able to tear through them in a short time without it feeling tedious. 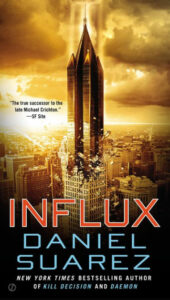 But Influx isn’t as good.

The basic premise is disagreeable: a secret government agency is sitting on technology it deems too disruptive for the human race, including artificial intelligence, fusion power, anti-gravity and materials science so advanced it’s basically magic. And Suarez uses it like magic, whenever the plot needs a crutch, one is provided. Much like Daemon’s primary conceit, that a pre-written script could be so perceptively written years in advance that it could respond like an intelligent agency, Influx is all about magic. It’s no longer near-future fiction, it’s science fiction, without a whole lot of science (except when a scientist character needs to seem smart, at which point the vocabulary levels jump a few notches).

The characters are caricatures, comic-book teenage-level representations of what normal people are probably like, but which seem to me to be more like actors in a reality TV show.

In Influx, a moment so creepy I hesitate to repeat it: two humans who cannot see each other try to determine their respective human-ness by asking questions about the smell of their wife’s genitalia. The correct answer is to be angry, because a human being would never consider the question and answer it, they’d try and punch the other person. That’s what Daniel Suarez thinks people are like.

The characters always talk and respond like Suarez thinks they should, and it makes me want to scream at the book real people don’t do that! But maybe they do. I’m continuously surprised by my inability to predict what the masses will do or like or buy. Maybe writing dumb stories about dumb people is enough to engage a wide audience. It certainly works for Micheal Crichton, and Tom Clancy. Maybe it will work for Daniel Suarez too.

So my soundbite review of Influx is this: Maybe it’s dumb enough to be popular, but it’s too dumb to be good.

Thanks for the review Mr. Effigy.
I really enjoyed his other three you mentioned, despite a bit of silliness. This sounds like I’d struggle with the dumb. I’m all for magic in stories, but not when it’s pretending to be science.
(I give Stross a magic-science pass on the Laundry Files because I like the tone)