I know a girl, she’s twenty six years old, and she was complaining recently about the movie The Departed. She was annoyed that Leonardo DiCaprio and Matt Damon looked so similar, and she was having trouble telling them apart.

And this struck me as a little bit odd, because… I mean: 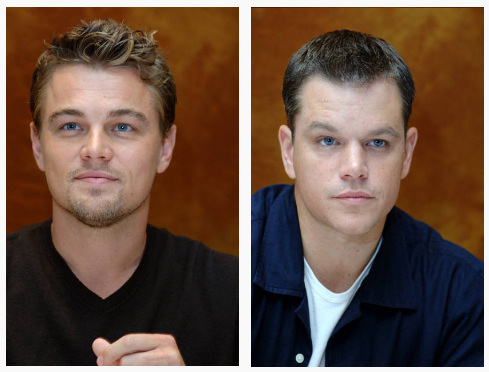 They don’t really look the same. With broad strokes, maybe: white dudes with dark-ish hair, but it seems clearly obvious that they’re different people. Still, she was struggling.  After some discussion, I told her it sounded like facial agnosia, or face blindness, where the brain’s normal functions that identify faces are somehow broken or degraded.

She’d never heard of the condition, so I sent her some links and she was floored. It didn’t seem entirely possible, at first, but as she read about it, the facts started to click together.  She started thinking back, wondering if it was a problem that started after one head injury or another (she partakes in some dangerous activities and has the usual, entirely normal number of accidents) or whether she’s always been this way.

I asked her if she could remember having trouble with TV shows or movies she watched as a child, and she couldn’t remember many examples, but decided not only that she did have trouble, but that she also avoided watching them rather than push through with something that was very difficult to follow.

And this year the eighth and final season of Game of Thrones is coming out.  She’s never watched the show but can’t escape the hype,  so she’s decided to catch up on the preceding seven seasons. Now that she knows about her facial blindness, she is going in with new methods to recognize characters, and she made a chart of the faces and attributes of the characters to help her follow along. 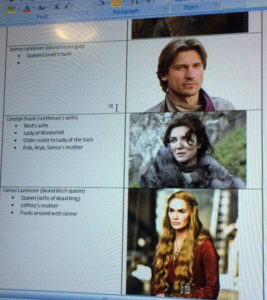 Anyone familiar with the show is forgiven for giggling at the idea of spending any time trying to familiarize many of these characters.  ^__^

Tonight, while watching the second season, she messaged me and asked me to please confirm that two faces were different. She was reasonably sure, but wanted some extra certainty, because one face seemed to become another. And if you’ve seen the show, you’ll immediately recognize and understand what’s just happened here: 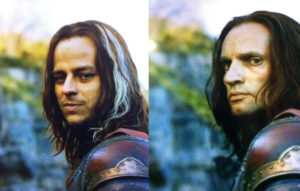 And I have to believe that most of us will immediately and confidently notice that the two faces are really not very similar, except in the broadest of strokes: caucasian dude with long hair, etc. It’s startling to think that for some people this isn’t a fully automatic recognition of two different characters.

Hoping to get an idea of the specific extent of the trouble she had dealing with this, I asked her to explain what she went through before she asked me for confirmation. Here’s what she told me.

I thought his hair changed, because the white streak left, but I dismissed it until another character looked shocked. So I went back and watched again, and the hair definitely changed. So I watched it a few times, trying to figure out what happened, and then became suspicious that the face had changed. But I wasn’t certain, and couldn’t pick any difference quickly enough while it was playing.

So I decided to screenshot it so I could do a direct comparison because that helps. And then I started looking for differences: the nose looked a bit different, the cheekbones, and maybe the eyes. I could tell they were different when I looked at those exact features, but the whole face together…

She asked me why I wanted to know, and I told her that it seemed like I couldn’t really be aware of my brain doing any of this except to hear about it from someone who couldn’t. It was as if my brain’s automatic systems were revealed by the unfamiliar, refracted image seen through the prism of her brain.

In further discussion, she revealed to me some of the things she was doing now to compensate for this tricky bit of brain mis-wiring.

She’s telling people about the difficulty she has, soon after meeting them, if she suspects she’ll see them again, to hopefully prevent any offense when she accidentally ignores them. And she’s always had trouble meeting up with people in crowded places, so she finds it helps to set very specific meeting places, and communicate in advance what one or both parties are wearing. And when she can, she’ll show up early and let the other party find her.

She hasn’t worked out a strategy for dealing with faces in movies yet. ^__^