I recently picked up an arcade cabinet and so I was pulling all my arcade games out of storage. I was somewhat surprised to find that some of them didn’t work right anymore, including my R-Type LEO board. When I plugged it in, the sounds were wrong. Some sounds were silent, and some were the wrong sounds – snippets of voice, instead of pzeer pzeer for the lasers, etc.

My first idea was bit rot, where the chips that store the game’s data start to fail. I pulled out every socketed chip and tested them against the ROMs in MAME, and they all checked out fine.

Now this doesn’t necessarily rule out the chips, sometimes they will fail intermittently, but it means I can turn my attention to the other usual culprits.

While searching teh interwebs, I found similar problems being discussed on arcade-projects.com, so I

During the process of all this prodding and pulling, the sounds of the game did change a little bit. Game events that were silent regained their noises, noises that were right became wrong, etc. This all pointed to a bad trace somewhere on the PCB, so I set about testing everything in the sound section of the board. Mostly this involved a lot of testing point to point with the multimeter. I focused on the Nanao GA20 sound chip, and the components around it.

You can see some dark spots in the image below, on the green traces. I don’t know what these are but they do not seem to affect the integrity of any circuits. At first I thought they were evidence of corrosion, but that doesn’t seem to be the case. 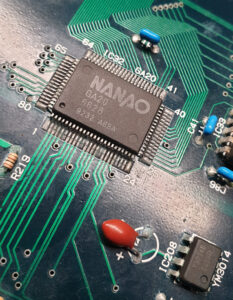 I thought maybe the interconnects between the CPU and ROM boards might be at fault, but no amount of flexing these or running moving them apart slightly would change the problem. I inspected the solder joints, taking close-up pics with my phone and examining those, since I didn’t have a magnifying lens, or eyes with a zoom function. 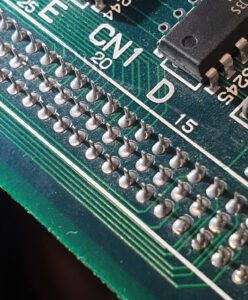 I did the same with the GA20 chip, looking closely at each pin, to see if there were any faults. This sort of visual inspection isn’t super effective, so I also pushed on the pins while the game was running to see if they’d make better connections. But the only thing I found was that the chip wasn’t in exactly the right place, but it was working perfectly well anyway. 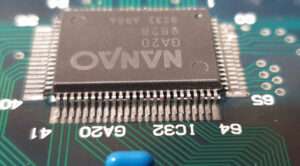 Finally, I narrowed down the search to the area with the fault. It’s in this image, can you see it? 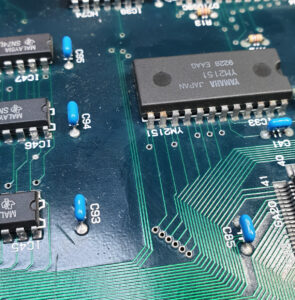 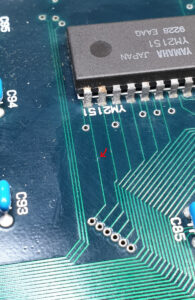 Once I bridged that crack with a bit of solder, all the sounds started playing normally.

Hurray! R-Type LEO is an underappreciated game in the R-Type series, and I love it.