If you’re a gamer beyond a certain age there’s a game you’ll remember from the old days called Ghosts n Goblins, or its sequel Ghouls n Ghosts. They were mid- and late-eighties Capcom games known for their unforgiving difficulty as much as anything else. They were hard, hard as balls, and were probably responsible for a lot of young gamers developing an adult vocabulary. They also had fantastic music and graphics, especially in the later games, but the difficulty is the first thing most people remember.

This is one of a series of articles about sprite histories (see: Mario, Sonic, Castlevania, Bonk, Wonder Boy, and MegaMan).

For a very long time there were only three games in the series: Ghosts n Goblins in 1985, Ghouls n Ghosts in 1988, and the final sequel, Super Ghouls n Ghosts in 1991. The first two games were originally arcade releases, but were ported to nearly every popular console and computer available at the time; the last was a Super Nintendo exclusive until 1998 when all three were re-released for the Saturn and Playstation as part of the Capcom Generations series.

These three games saw eventual release on more than 20 different systems. Most of the modern releases used the same sprites as the originals, but back when the technology was caveman primitive, every platform needed its own sprites, and some of them didn’t fare at all well.

1985. Think Dig Dug, Gauntlet, Super Mario Bros. And then, Ghosts n Goblins. Capcom matched the difficulty with pixel-perfect controls and a goofy style. The hero, Arthur, could take only two hits before dying. The first time he’d lose his armour, and be forced to play in his boxers; the second time he’d be reduced to bones and would restart – probably from the beginning of the stage.

Note: for most images here, mouse-over to see Arthur in his shorts, or click to see both versions. Mobile phone users can tap the images to see the un-armoured Arthur. 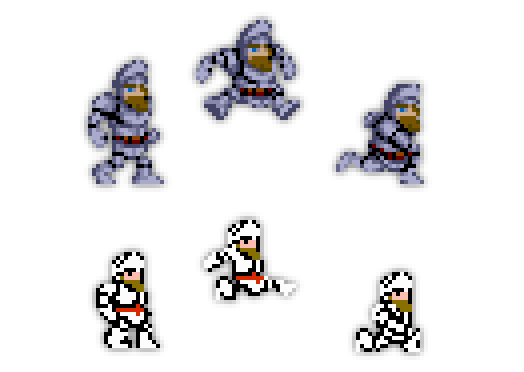 There were only two ‘Capcom’ releases of the first game, the arcade version and Nintendo’s NES. Interestingly, in the arcade game Arthur is one or two pixels taller without his armour (compare the height of his eye). Perhaps it’s really heavy? Arthur’s height does not change in the NES version.

The NES and GameBoy Color used the same sprites

Strangely the unarmoured sprite in both NES and GBC games did not include the black outline, so a very skinny Arthur was filled with whatever backgrounds were behind him. If he was standing on a black space, he looked quite dashing. Against the ice towers of stage two or any other coloured background, however, he looked a little transparent. This is a particularly weird decision as Arthur, somewhat unusually amongst all other video game sprites, typically has at least half a black outline along his rear side like a drop-shadow. But not for the NES game.

The NES sprite was re-used for the GameBoy Color version, so it’s not shown separately here.

As was usual for the time, the arcade and console games were the best versions, while home computers suffered with ports of varying quality. Very varying, in fact. Some of the hardware graced with ports of this very excellent game were vastly outpowered by the NES hardware, to say nothing of the arcade version. The resolution was usually lower, the number of colours made the NES sprite’s four seem luxurious, and it seems that the people making the games didn’t have any license requirements from Capcom to make the games look anything like the originals.

Don’t forget to hover your mouse over these images. Especially the next one. Ye gods.

The poor bastard on the Commodore-16 system. Only one colour, and the sprite doesn’t change when jumping or throwing. It’s sort of a hideous mess, much like the Commodore-64 sprite in the middle. With more memory and capability the C64 version at least managed to be hideous with all of Arthur’s poses. I honestly have no idea what happened to the Tin Man slash Elephant Man PC version on the right. It’s so indistinct I can’t help but think the artist drew these sprites based on thumbnail-sized screenshots on the pages of a magazine that had been photocopied and then faxed to him. I don’t know if I’ve ever seen anything so bizarre.

The ZX Spectrum sprite was made by an artist determined to make the most of the platform. It’s not really Arthur anymore, but it’s clear and doesn’t offend anyone and, considering the limitations of the hardware, looks pretty good. The fellow in the middle didn’t come across quite as well. No other poses were available, and since there was no armour-free sprite, the player simply died when hit without the second chance afforded by every other version. The checkerboard sprite on the right is from the Japanese PC-88 computer (the sprites are from screenshots I found on mobygames). Unfortunately I was unable to actually play this game, so except to say that it’s ugly and a daringly effeminate without the armour, not much else is known.

The Commodore Amiga sprite was nearly perfect. The size and colours are different, but it’s recognizably Arthur. The strange snowman on the right is from the Atari ST version. If you look at it from a distance it looks like it was digitized from a photo and converted to a low-res low-colour sprite by someone who really didn’t care anymore.

The second game is the one that cemented the Ghouls n Ghosts legacy in gaming history. Capcom applied their powerful CPS-1 arcade hardware and upped the stakes in every respect. Better music, longer levels and – most importantly – larger and more detailed sprites. This time around the power available in home computers and consoles was far greater, and the results were almost arcade perfect in many cases.

On the left is the best you could get on a 16-bit computer outside Japan: the Atari ST and Commodore Amiga versions of the game used the same graphics, despite the Amiga’s much more powerful hardware. If you were living in Japan and were lucky enough to have an X68000 computer, a pixel-perfect arcade port was released by Capcom themselves. The X68000 was, it seems, used as a development platform for their arcade games, so the port was probably very easy to do. 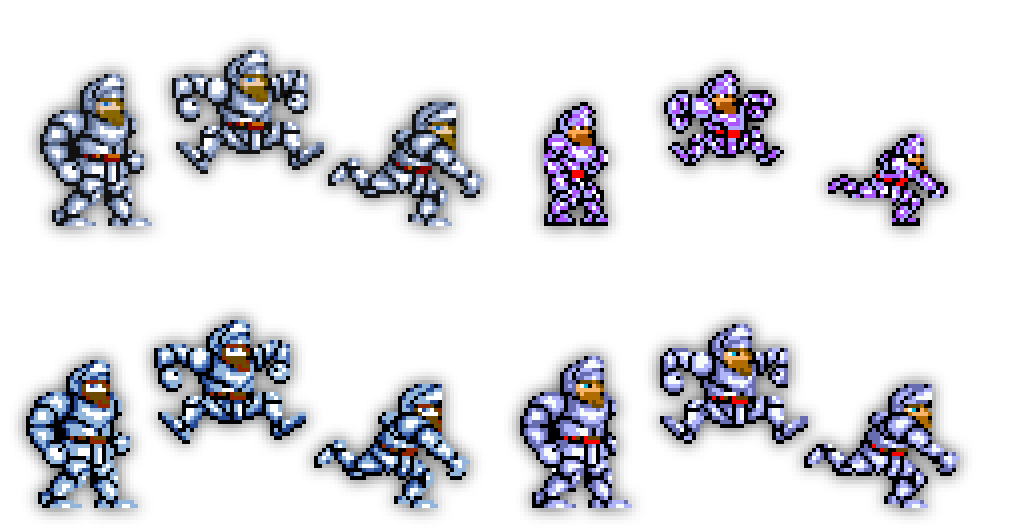 Arcade Arthur sets the standard. Below him is the SuperGrafx version, which – except for some rather garish palette choices where the colours were reduced – is identical to the original, right down to the strange stare in the armourless sprites. The MegaDrive Arthur, who had better colours selected for his armour, had his appearance subtly tweaked from the original. Rounding out the set is the cramped and speckled Master System Arthur. From here, things get a little bit ugly.

You could do worse, however, and many players did. Developers sought to satisfy the voracious demand for new games on hardware that was becoming hopelessly outdated.

The Commodore 64 was showing its age with sprites not much better than the first game, while the Amstrad CPC could only say that it was better by virtue of its Arthur sprites having eyes. And on the ZX Spectrum, the artist threw out the original graphics and drew some inspiration from Captain Haddock to produce these great looking sprites that weren’t quite entirely unlike the originals.

The last game in the series, released six years after the first game, consigned both of the older games to history with no lack of authority. As an early release for Nintendo’s new Super NES console, Capcom had something to prove. Super Ghouls n Ghosts blew players away with all new music and graphics more lush and detailed than even the first two arcade games.

Not that you could tell based solely on Arthur’s new sprites. They’re sort of skinny, and look a little bit like the second arcade game… Because they’re basically the same, reduced slightly in size. One of the Super Nintendo’s greatest tricks was its low-res screen. All the graphics, including the sprites, would be stretched horizontally when displayed on the CRT monitors and TVs of the time, without incurring any noticeable degradation. (This is quite unlike what happens on a flat-screen display, but that’s a topic for another day). 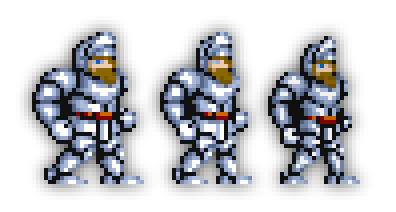 Basically, Capcom could cheat, using smaller graphics that would be stretched to look just like the arcade, without using up expensive cartridge storage with those higher-resolution sprites. On the left, Arthur from the second arcade game. In the middle, the same sprite reduced from 28 to 23 pixels. Finally, the SNES sprite on the right. When shown on a TV, the arcade and SNES sprite would appear the same size. You can read more about this if you’re curious.

Finally, there’s the fourth and last game in the trilogy: Ghosts n Goblins for WonderSwan. Released only in Japan, on a black and white portable that never really found an audience, the sprites from this game are excellently re-done. You can see how modern development techniques and more storage results in better sprites, even on a screen with only four shades like the original GameBoy.

From here the series shifted to polygons, with a third-person 3D spinoff called Maximo, a deluxe sequel called Ultimate Ghouls n Ghosts on Sony’s PSP, and a couple of games for Apple’s iPhone. There were a couple of sprite-based games for pre-iPhone mobiles, and perhaps I’ll get those screenshots someday…

Arthur had cameo appearances in two other games. There was a simple mini-game in SNK vs Capcom: Match of the Millenium for the Neo Geo Pocket system, and Arthur appeared as part of a special attack in Marvel vs Capcom. The two sprites could not be any more different: 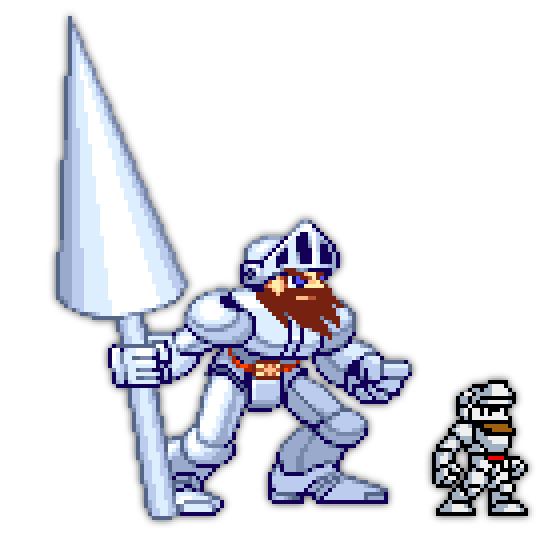 And in 2005, Namco x Capcom for Playstation 2 saw the most incredible Arthur sprites: 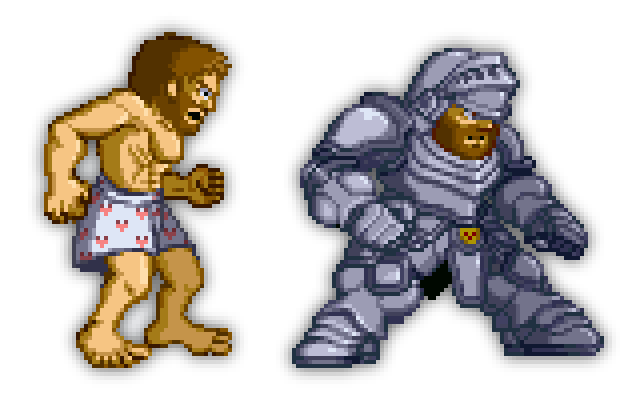 Thanks to the usual gang for pointing out some errors and making my wretched stuff somewhat less awful: Neko, Steempy, Dark Age Iron Savior.

Hey, m8 I doing a remake and need a good quality sprite sheet animation of characters like Arthur etc. Dont suppose you have any? 32 bit quality or at leat 16 bit like amiga etc

Alas, I do not. There are several good resources for sprites on the internet, but I only have the ones you see here.