I was lucky enough to be given the Astroboy review assignment when I was working for Official Nintendo Magazine (UK). Lucky ’cause it wasn’t a half bad game, and it was made by Treasure, who typically make very interesting stuff.

Here it is, complete with all the screenshots and sprites I prepared. I don’t remember how many of these were used in the magazine…

In every young robot’s life there comes a time when he must venture forth on a journey of self discovery and tumultuous kickass. An adventure of pixely proportions and explodey pastels. Luckily for us we get to tag along, ’cause this is no ordinary robot – this is the Mighty Atom, Astro Boy himself, and he’s not stingy with the tumultuous kickassery. 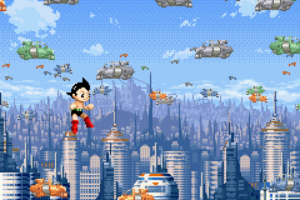 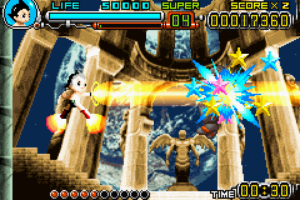 Every pixel is lovingly hand crafted by the somewhat genius-like artisans at Treasure, whom Sega tasked with creating this game. Unlike other, lesser games there’s almost no pre-rendered garbage filling the screen and making your eyes bleed. If you put this game into your GBA and it isn’t oozing pure sweet honey a few seconds later then send your system to Nintendo, ’cause it’s obviously broken. 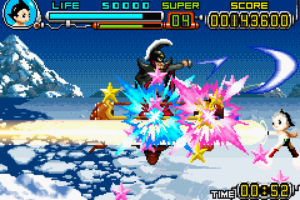 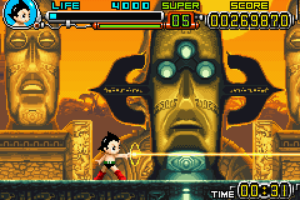 The game plays like a dream. With a few simple controls Astro can move, jump, shoot, and blow stuff up in much the same tried and true control scheme you’ve grown used to on countless other platformers. You’ve rarely seen it done as well as this however. Astro responds when you need him to and he does what you ask of him, no complaints. 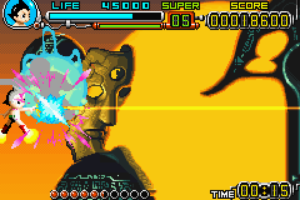 It’s a good thing too, ’cause this isn’t an easy game by any stretch. Astro Boy is hard and demands you learn from your mistakes and try new tactics, unlike less considered games where you can succeed by throwing yourself against the bad guys until they die. Your progress is automatically saved every time you clear a scene, which happens several times every stage. When you die you can restart at the last auto-save point, which is never far from whatever it was you’re compelled to crush. 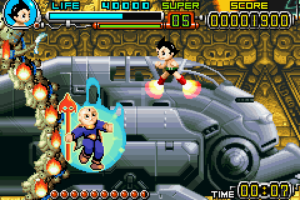 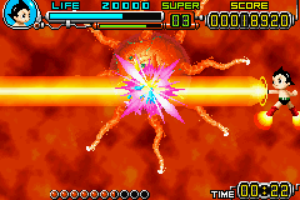 At the beginning of the game Astro is a bit confused, he’s recently been constructed – possibly out of little boy parts – and he has no clear memory of who he was, or who he is. This adventure then is a bit of self discovery and our hero’s deficiencies of recall are used as a plot device, explaining why Astro’s so weak to start off. “We can’t let you run amok at full power,” they explain, “until you’re sure about your identity and abilities!” Fair enough, no one wants a robot capable of cracking mountains loose on the streets until he’s in full possession of his faculties. 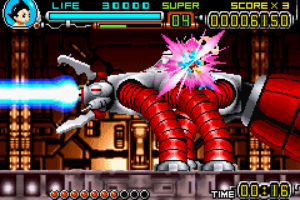 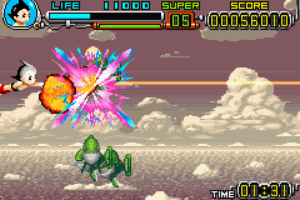 As Astro meets people he is given to understanding them, and when he does their face is added to his mental chart of people. Each person understood is another point which can be applied towards stronger stats: more nimble dodging, fatter lasers, more health, more tumult. In a “gotta catch ’em all” vein there are lots of hidden characters to meet too – most from the Astro Boy cartoon, but quite a few from Osamu Tezuka’s other creations. 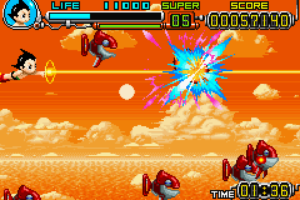 At the beginning of the game Astro meets his first villains and starts to understand what’s going on. There’s a short training level, and then he’s left to beat up everything that moves – or looks like it might – in his quest to understand himself and bring the baddies to robot justice. After a quick fight through the Metro City, a warehouse and what appears to be a giant spider web complete with robot spiders, it’s time for the first boss: The surprisingly spider-looking Geo Worm. 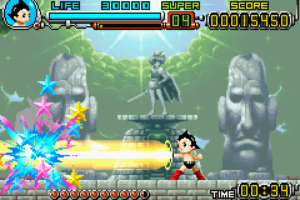 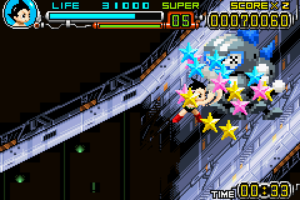 Next up is an artificial sun terrorizing air traffic over the ocean. It starts off rolling around the screen trying to burn Astro, but then grows nasty tentacles (Tentacles in a Japanese game? Say it ain’t so!) and becomes a fierce opponent indeed. When it disappears on a secret island, Astro encounters a series of good guys who’re trying to solve the mystery of an ancient civilization. Most of them mistake Astro for a bad guy and try to stop him. As you might expect, exciting fights ensue and many people are understood and that means powerups.

There’s an ancient city to scour clean of robot vermin, a violent trip to the moon, explosions in Antarctica, races over the ocean, trains to chase, and that’s not even half of it.

The Bosses (a side-panel):

Some of the bosses are wildly inventive, and perhaps a trifle bizarre. Take for example the gigantic robot beetle, modeled after a real beetle Japanese children keep as pets. There’s a short, bald, three-eyed dwarf that conjures up Aztec-looking foes, a speeding train with four guns on the back end, and a boss in a cathedral, shooting lasers nearly as wide as the GBA screen! 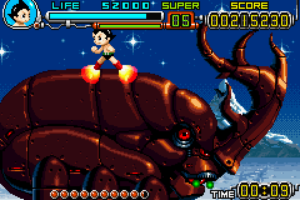 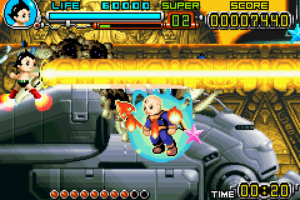 Also, I seem to have gone through several drafts. Some of them started off great but fizzled, and the one above appears to be the one that was eventually used. Some of the earlier drafts had good bits, but I think I was trying too hard when I wrote things like this:

This is the kind of game your GameBoy Advance was made for. This isn’t another licensed 3D crapathon wedged into the wholly inappropriate GBA by coders at the hurty end of a marketer’s whip. Astro Boy is the good stuff, the kind of game that gets people into games, and reminds people who already play that it was a good idea to start.

Starts off good, but fizzles at the end, doesn’t it? Here’s another one that didn’t make it:

When Sega set out to make a game from one of Japan’s most popular cartoon characters they knew exactly what needed to be done. In perhaps one of the wisest moves Sega’s made in recent memory they handed development detail to Treasure, and boy did they deliver. A few seconds with this game and you’ll be a Treasure believer.

Too fanboyish, I reckon. This next one seems to work for me. I’m not sure why it was dropped:

Treasure’s pulled out all the stops and stuffed an astonishing amount of variety into the levels and baddies you’ll encounter. Many of Astro Boy’s old foes make an appearance, and there’s also guest appearances by characters from other Tezuka cartoons, like Simba and Blackjack. There’s giant men, enormous lasers, robotic beetles and a talking duck.

Finally, there was this one. I think it was good too, and I’m kind of confused. Is the full review above really the one I sent in? It doesn’t even have an ending! What was I thinking?

In case the dreadful monotony of having your platforming and blasting dreams realized becomes too much, there’s a few shooting levels thrown in for good measure. One will have Astro screaming across the antarctic blasting shadowy men from their hovering platforms, or shrieking down tunnels in pursuit of massive gun-totin’ trains, or shooting robotic fish. These don’t feel tacked on either, they’re truly enjoyable in their own right.