This article was written for a sequel to my book that was ultimately abandoned.

The arcades have always had shooting games. Some of the earliest games were shooters, but there was a period of time – from the late eighties until the mid nineties – when arcades were dominated by them. The genre epitomized the arcade ethos: three minute games and the technological arms race all the manufacturers engaged in.

It all started in 1978. Taito’s Space Invaders was the grand daddy of the shoot ’em up game, and it created the template nearly all games would follow: Player at the bottom, enemies at the top, enemy formations and waves.

Most new features were iterative, and a time traveler from 1978 would probably recognize any shooter released since then as a descendant of Space Invaders.

Following the evolutionary process is fascinating. The pressure to one-up (heh) competing manufacturers was intense. If the games didn’t change, the hardware did. When the hardware race paused for a breath, games differentiated themselves with gameplay innovation. 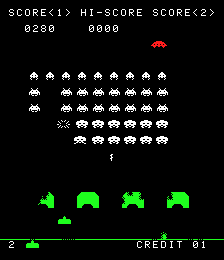 This is what the state of the art looked like in 1978. The game was black and white, with tinted cellophane taped to the monitor to provide colour.

Space Invaders hit the world with such a thunderous bang that arcade machines literally overflowed with money. Some arcades in Japan had only Space Invaders games to play, and any arcade that couldn’t get this game faced severe losses to competitors.

The game was simple. Three kinds of enemies would descend right, left and down towards the player who, as would become common, was tasked with saving the world. The hardware was so primitive the game would get faster as the player destroyed the alien fleet, and the system had fewer enemies to draw.

For cost and technical reasons the first games were monochromatic. In 1978 there wasn’t much going on, and these 12 games cover more than two years of arcade progress.

Clones and knockoffs arrived almost immediately, but there was no shortage of experimentation as well. This new shooting game bandwagon was being jumped on by a lot of companies, many of which wholly unqualified to do so. Games of this era were ugly and awkward, and even the best of them were slow.

Nothing in the arcades lasted very long, and this era was no exception.

The second wave had multiple colours. With more experience and newer hardware, a whole eight shades were available to game makers. PC gamers might recognize the CGA palette, made from the simplest colour combinations.

The CGA palette. More or less.

Each of the three primary colours could either be on or off, so red or green, or red and green for yellow, green and blue for cyan, and so on. Turn ’em all on and get white, all off for black. Some games would add a simple circuit for half-brightness to get dim versions of the same colours. With this kind of all-or-nothing primitive power, it’s no wonder so many games of the era were so garish. These were seriously ugly games.

And they were bigger too, sometimes much bigger, as designers tried new ideas in graphics and play. Some of these monstrosities were excruciatingly tall, but it seems the game makers swiftly recognized it as a problem. Sprites more or less stayed within a reasonable boundary. 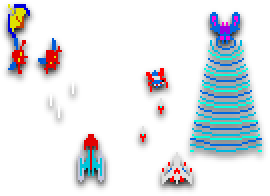 Amongst all the dreck and me-too games were some true gems, and they were so obviously better that it’s no wonder they’re still remembered today. Games like Namco’s Galaxian (1979) and Galaga (1981) were much, much, much better than most of their peers.

Around 1982 , the year Donkey Kong came out, things started to get interesting, and many games released around this period will be recognizable to modern players. It started with Namco’s Xevious, a remarkably simple and boring game by today’s standards, but with a very stylish design. This is where the good stuff started.

Many games that we now consider classics, like Gyruss, 1942, and Twinbee started appearing at this time.

Xevious introduced a whole new level of reality to shooters – games were no longer set exclusively in space. This is well and truly where our modern shooters started getting awesome. The above image includes classics like Dragon Spirit, Salamander, Galaga ’88, Twin Cobra and 1943.

Advances in hardware ensured the number of available colours was greater from each game to the next, and screen resolution started to increase as well. By the mid eighties sprites on an arcade screen could pack many more pixels into the same screens as their predecessors. Games were soon exploding with additional detail, to the delight of players.

It was a great time to be playing these games. Each new game looked better than the last, and with a real history behind the genre the artists could build upon what had come before. Naturally this led to some copying, but more often it led to graphic evolution.

In the late eighties two-dimensional videogame hardware had more or less reached its peak. Game sprites could now be as big as designers wanted, and include as many colours as they could imagine. It was a real golden age, with a new game seemingly released every week.

There was absolutely no limit to the awesome things you’d see in an arcade. Arcades always included many different kinds of games, from light guns to UFO catchers, skee-ball and racing simulators, but the defining feature of the arcade was the video games. These games advanced in lock step with the technology supporting them. More, faster, bigger, better. And then…

And then it all came crashing down. All the old companies died off or changed focus as the shooting genre lost its lustre. You can see how fighting games replaced shooters as the genre of choice in Japanese arcades in this ten-year retrospective by the editors of Gamest magazine.

Those few companies still making shooters turned away from the tired old sprites, lured away by the siren call of 3D graphics. 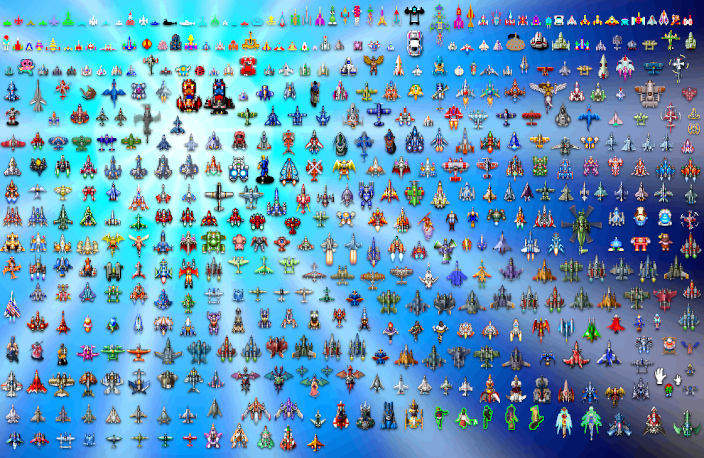 The modern world, it seems, no longer has time for either one.